An Alvis, the mysterious John Stafford and other stories – Maurice Richardson.

The Alvis Speed 20 which I bought in 1979 came with a continuation log book the first entry being dated 1950 so there was no reference to the original purchaser. It was a 1935 model and the book “Vanden Plas – Coachbuilders” illustrates the car’s design and lists it supplied through the Charles Follett dealership.

Contacting Folletts, their records showed that the car, BXL835 was ordered in April 1935 by John Stafford of 16 Bolton Gardens, SW5. A search of the Zoopla web site of properties in Bolton Gardens shows these houses today offered for rent as apartments. A 3 bedroom flat is listed (in 2018) at £9500 per month.

The 1935 chassis price of the car was £650 and my copy of the invoice from Vanden Plas to Folletts for the drop head coachwork was an additional £211/1/11d. Taking Follett’s markup, the amount with extras finally paid by Stafford was over £910 which would buy two nice semis in 1935 so I set out to find out more about him.

Clearly the family were not short of money! After World War 2, according to Alvis Owner Club information, his address was then Overwey, Tilford, a village near Farnham in Surrey. Otherwise, John Stafford seemed almost totally to disappear from the radar! Initially I found out far more about his father, mother and sisters, so it became a “WHO DO YOU THINK YOU ARE” of the Stafford family.

There is just one reference in ancestry websites to John Stafford and that was in the 1911 census where he is listed aged one so he was 25 when he ordered the Alvis. He and his family in 1911 lived in Cobham with a staff of 7 servants. His father Hugh Granville Stafford, the son of Colonel Hugh Stafford, had served as a Captain in the army in 1899 (presumably in the Boer War), had married the daughter of a famous US painter in 1905, and volunteered again in 1914 in the Great War. He was invalided out on 11th October 1918 just a month before the Armistice. He is listed under Motor Owner Drivers as a Captain in the 5th Supply Column. It seems very likely that Hugh was a pre-1914 early motorist.

The 1939 Register which the UK Government ordered to list everyone in the UK at the start of World War 2 shows Hugh Granville Stafford at Overwey with 4 servants but not John. Overwey was built in 1908 and stands in 20 acres of grounds and gets its name from overlooking the River Wey and its valley and the Staffords are said to have owned the small village of Tilford.  Hugh died at Overwey in 1941, his wife in 1969 in Westminster.

The society weddings of John’s sisters were Joan’s at St Georges, Hanover Square in 1930 to a member of a stockbroking family and who later was to be commissioned major during WW2, and Ruth’s in 1937 in Chelsea to a farmer, later to become an MP and government minister, finally raised to the peerage. In 1939 Joan was living at Fritwell Manor Ploughley, Oxfordshire. Ruth and her husband were farming on the North Downs.

Since John’s grandparents were American, his mother would have relations there and I found her making voyages across the Atlantic before and after the War. And then I had a breakthrough. In 1950, as first class passengers on the Queen Mary, bound for New York, John’s mother living in William Street SW1 is listed with “Hugh” Stafford aged 40 (clearly son John) of Bramingfold farm, Billingshurst. This led to records for Hugh John Widdington Stafford born at the end of 1909 and married in 1936 in Westminster to Christine Aline Gale. He seems to have been using either of his forenames at different times. In the 1939 Register he is listed at a registration location at the Doulton ceramic manufacturers’ building in Lambeth as an architect volunteering for the Auxiliary Fire Service along with 17 other volunteers.

A recent discovery reveals that Christine’s father was a civil engineer and architect who spent many years working for the Hong Kong authorities and that the family lived there from when Christine was an infant. Her mother, a doctor, had died while Christine was quite young and the family returned to the UK probably in the late 20’s. The Times on 12 December 1935 reported that she and John became engaged. By then, John had owned his glamorous Speed 20 for 7 months. The Times reported their marriage on 26 March 1936 at St Georges, Hanover Square. He is described as a “student” on the marriage entry presumably of architecture. Could the car and their interest in architecture have worked the magic?

The 1939 Register shows John’s wife Christine A Stafford, a retired architect aged 29 at Ladbroke Terrace and listed as driver in the LCC ambulance service At that address there were also 2 servants, another female companion LCC ambulance driver and an architect Wilfred M Woodhouse aged 28, again an Auxiliary Fire Service volunteer. Those were dark days and they illustrate all the Staffords’ history of public service. Records show that John died in 1989 at 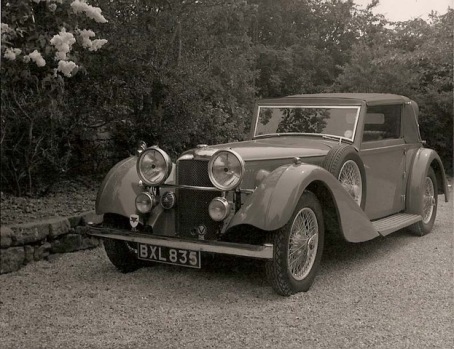 Haywards Heath. Christine died in 1995 near Farnham. Apparently, John still ran the Alvis in the late 1940’s but from then it had various owners and in those post-war days, unlike today, the classics we now cherish often endured a hard life.

John Stafford’s daughter sent me these pictures. John and Aline Stafford as young architects were exploring new housing designs in Norway and Frankfurt. In Norway, Aline had left a fur coat on the seat in the open car visiting a school of architecture and the fur coat was still there when she returned.

BXL’s restoration over decades is another saga, but I am still searching for John’s post-war story.

There were two previous AOC member owners registered in the 1950s (968 and 529) when I bought BXL from Mrs Alice Marney.  The log book shows it previously registered to her husband but I think he died some years earlier.  She joined the AOC with the car in 1964. It was in a lockup garage in a builder’s yard in Oldham. She gave me press cuttings describing the theft of the car from another lockup garage.

Ultimately it turned out that an Alvis specialist in the Blackburn area was charged with the theft but found not guilty.  His background was not blameless!  He had been to prison twice before!  I had run into him before I bought the car and I have to say he was a likeable sort of rogue! After the theft, the car was recovered from Thame near Bristol when a new purchaser tried to register it with the AOC.

I have the police photographs (left – and see postscript)

The VDP design number is 1119 and they sent me the drawing you already have in the archives and a rough version presumably to get the style approved.

The car was restored in time for my daughter’s wedding 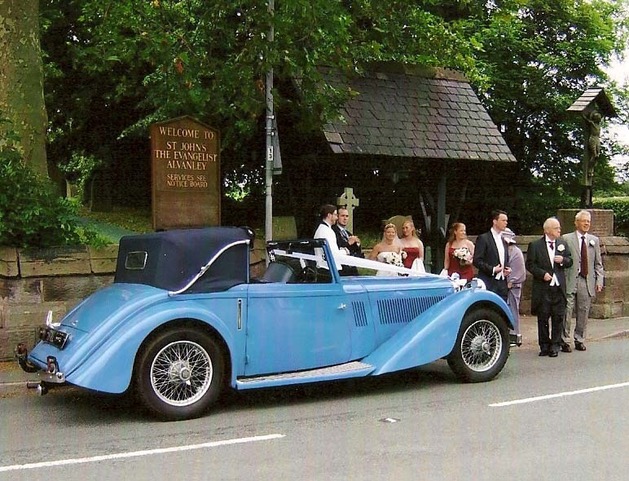 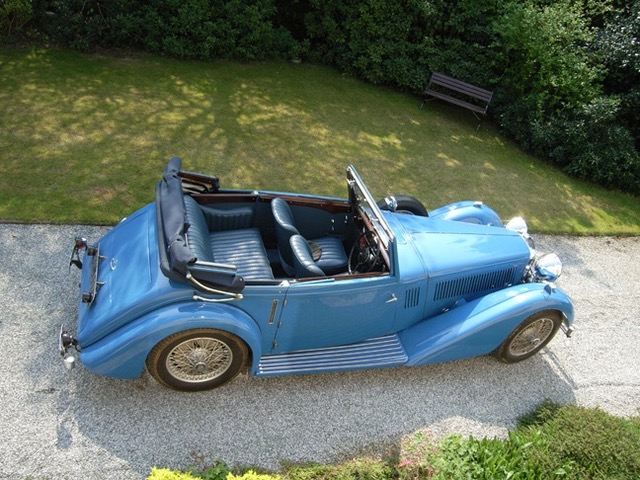 Way back in 1979 when we were all young, we did not recognise problems, they were challenges to welcome and overcome. Looking back, I am surprised at my optimism – and energy. I suspect our mutual friend removed items he had customers waiting for before he sold the car on. Starter motor and cover, dashboard and all gauges, seats, pass lights, horn plus many minor parts all missing. It was not too difficult to find good second hand spares then, unlike today I had to do a lot of searching and travelling. In fact, in one visit to his place, he offered to sell me some parts of a customer’s car he was “restoring”. But then again, when he worked at the bank, he offered to look after customers’ money on a personal and private basis!!
I had done a mech eng grad apprenticeship and had access to some machine tools at work and to unauthorised support from colleagues. That was a major advantage. I got a certain amount of leg-pulling over job priorities.
I understand the police pictures were taken at Thame at the unsuspecting members home. I wonder if that AOC member 4776 got his money back. I’ll say one thing for Mrs Marney – she spared no efforts to give the theft publicity – involved the MP, the AOC, the local papers, the police. I know this is all interesting gossip, but I would not like it to overshadow the Stafford story too much.

Maurice had written about his Speed 20 in 2009 in AOC Bulletin 515, reproduced below. With the help of Wayne Brooks, the following fills in some more of the detail, all taken from the CD compilation of Alvis Owner Club Bulletins which is available to Friends:

This is a great story. Interesting that Maurice Richardson mentioned “Contacting Folletts, their records showed that the car, BXL835 was ordered in April 1935 by John Stafford of 16 Bolton Gardens, SW5.” Apparently in the early 1970s Follets’ records were available.  What happened to them?” I recall reading somewhere that Follett (possibly others?) sometimes ordered 3 of the same design in order to get a better price?? Photos of 3294, chassis 12034 and 3291, chassis 11954 look quite similar to BXL 835.

Only 15 VDP Dhcs are believed to have been produced, as follows: 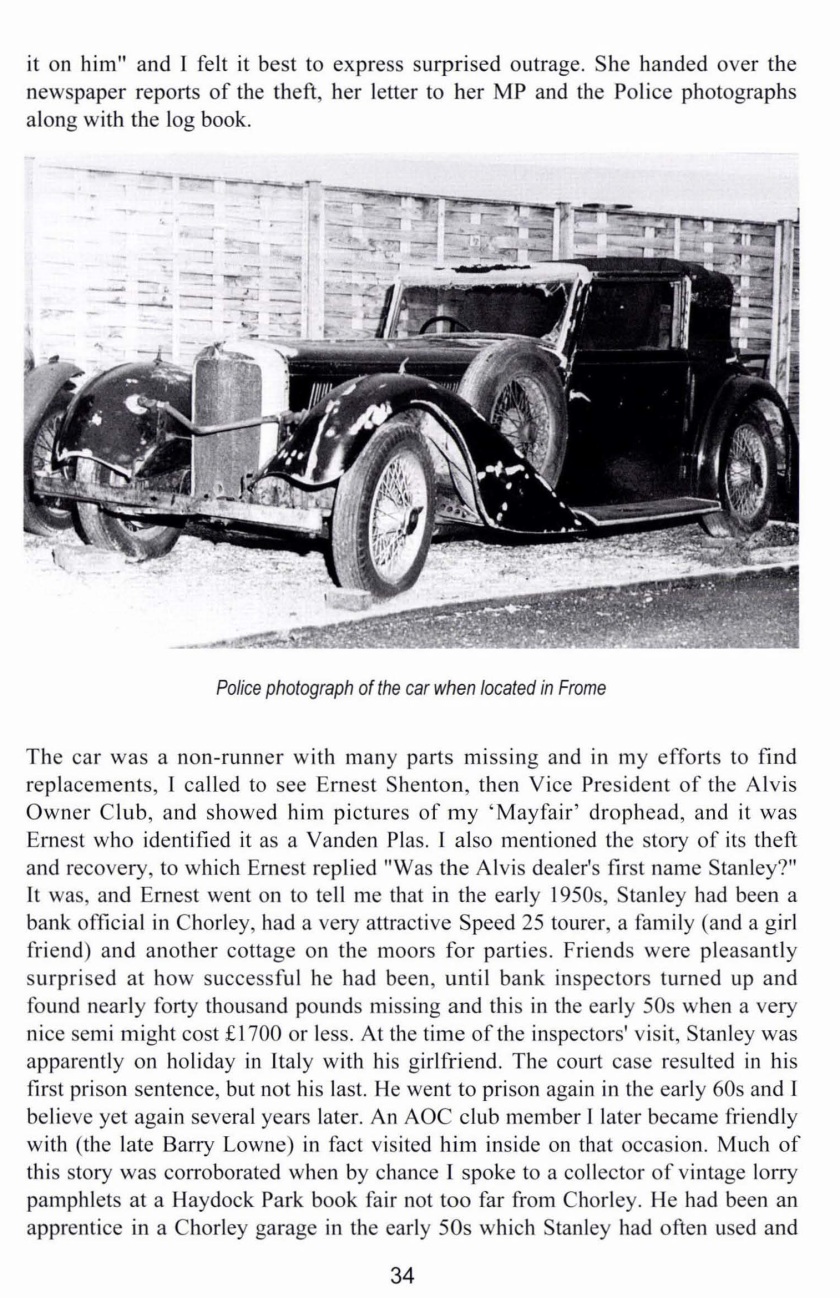 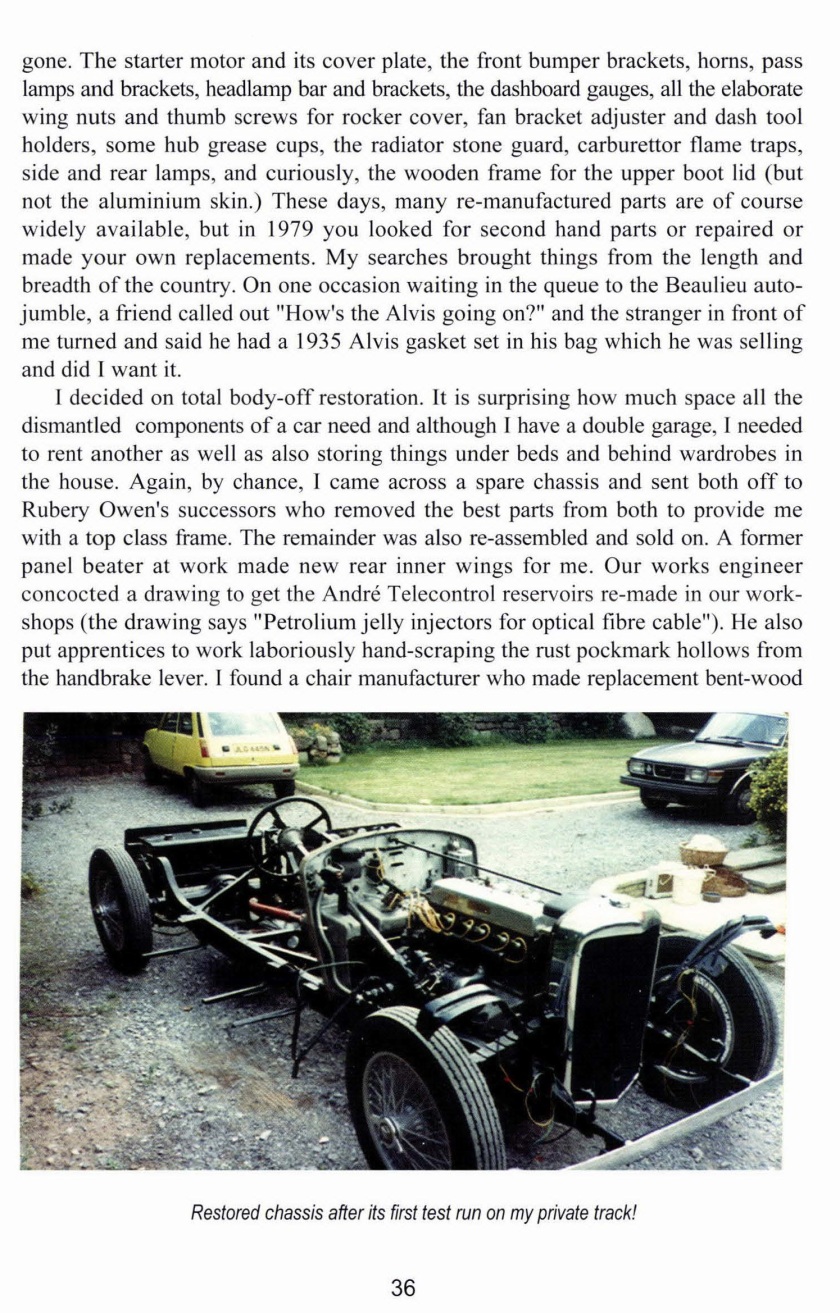 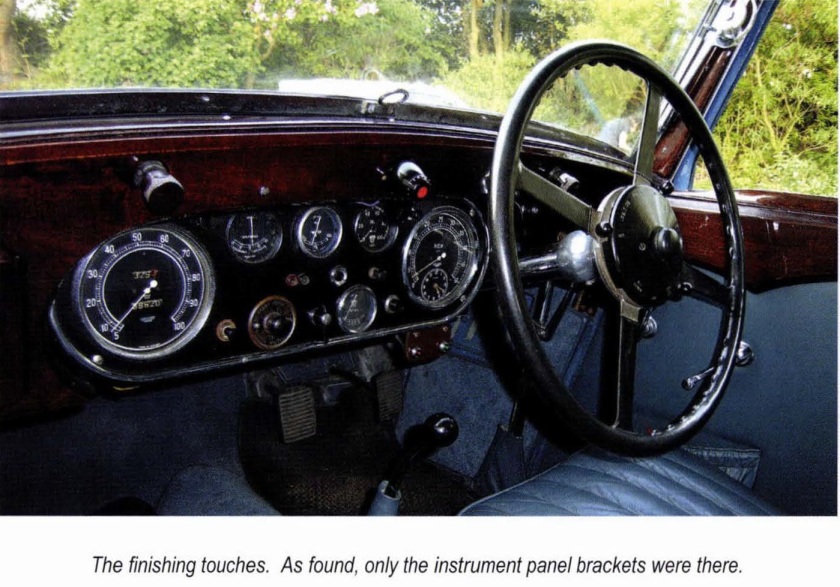 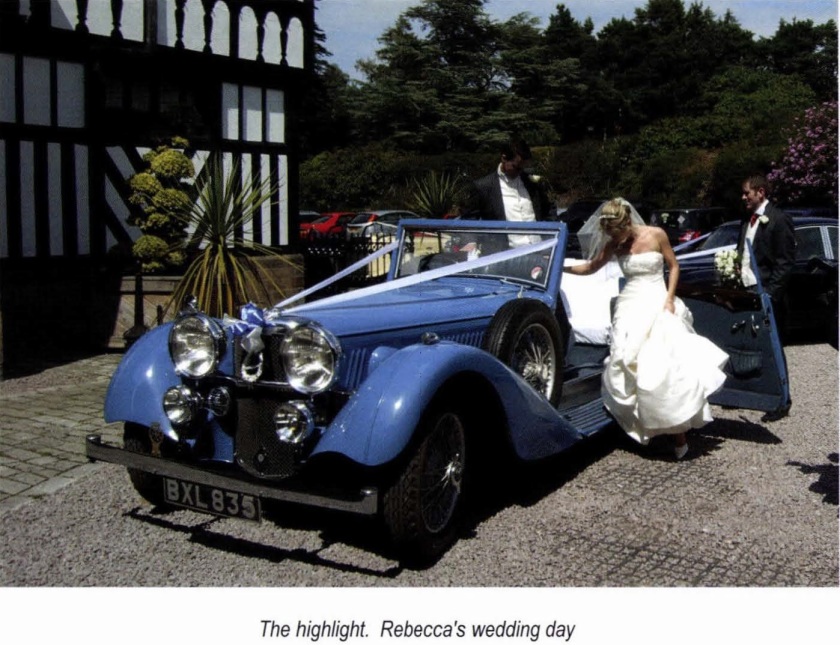