The 12/70 was the last four cylinder model before the war stopped car production. It was the subject of the last printed AOC Model Register in 2009. Often the choice of the special builder, a tired Mulliners saloon body was often discarded but a good number remain in original state.

The chassis numbers ranged from 15149 to 15893 with three prototypes 14546-8 and the SC type starting at 15509. November 1937 saw the start of significant Mulliners saloon being despatched, the first Mulliners dropheads in January 1938. 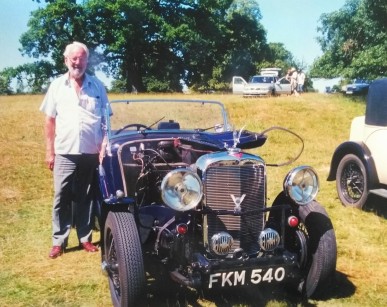 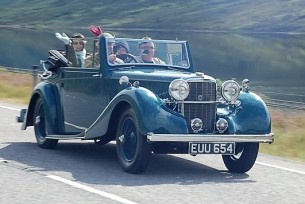 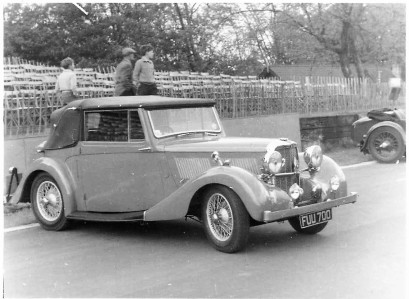 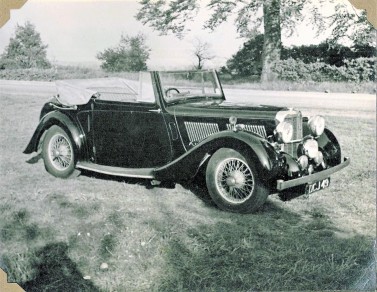 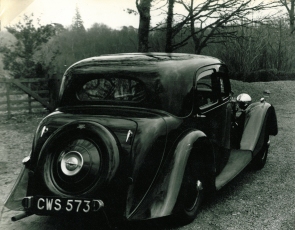 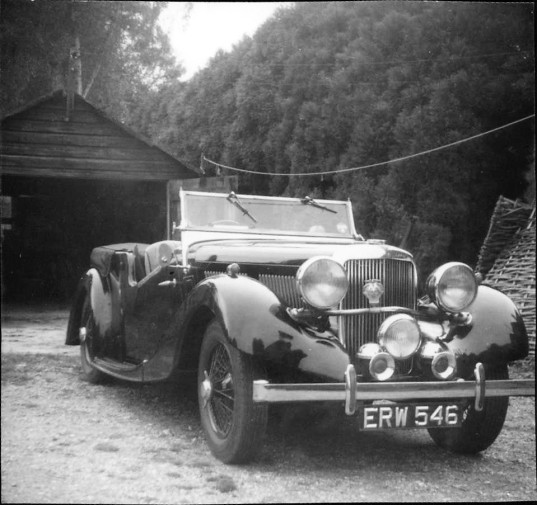 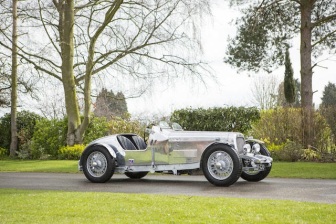 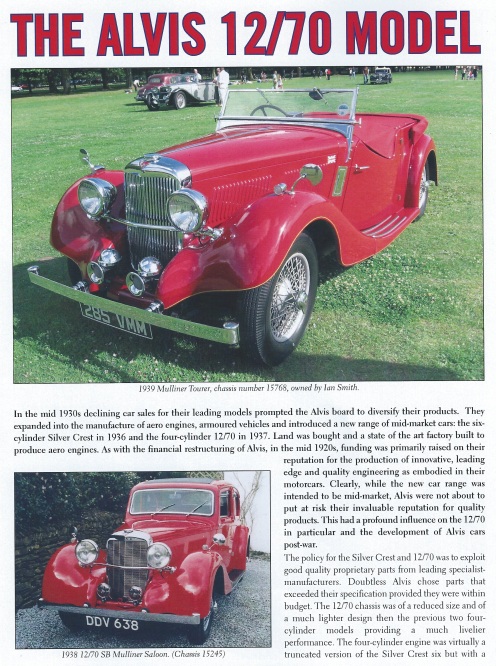 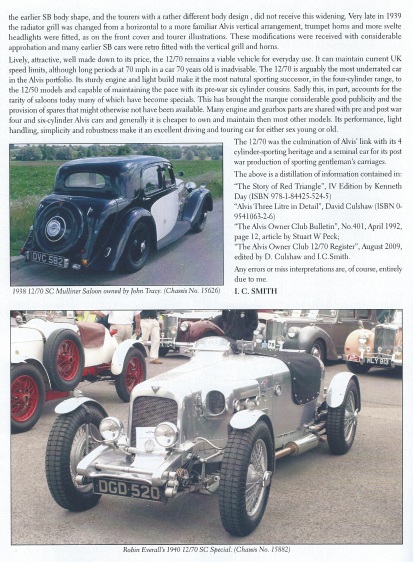 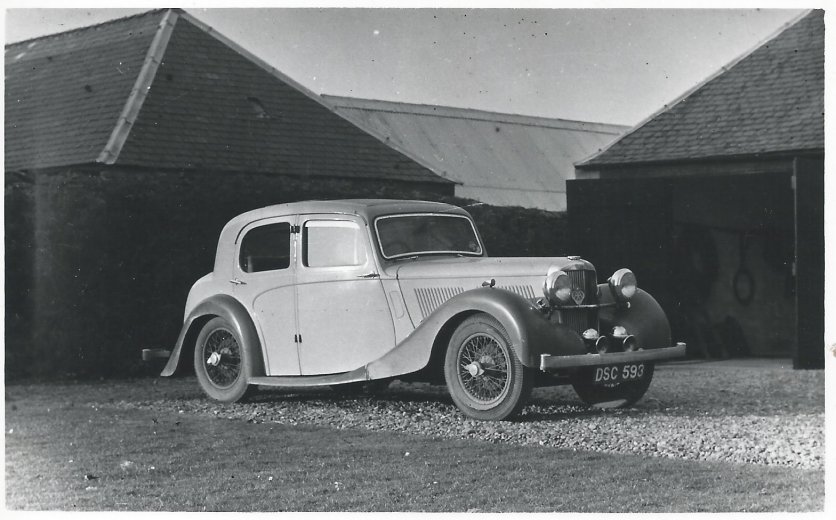 If you have any information on the fate of any 12/70 please leave a comment. Photos of specials are especially welcome.

The 12/70 was a successful model, with a total of 754 produced before the war brought production to an end in 1940. 551 carried the Mulliners saloon body, 150 were Mulliners dropheads, 18 Whittingham & Mitchel tourers and 13 Mulliners tourers, plus one Mulliners fixed head coupé. The remainder were “one-offs” or unknown “chassis only” deliveries. It is difficult to be categorical about numbers as some were in production but believed destroyed when the Alvis car factory was bombed by the Luftwaffe in 1940.

The 12/70 was produced from 1937 to 1940 in two series, designated SB and SC 13.22. It was aimed at the “quality four cylinder with a sporting flavour” market. Standard coachwork was by Mulliners of Birmingham, their first major contract from Alvis, and comprised a neat four door saloon and a two door drophead coupé, priced at £435 and £445 respectively.

A handsome louvred bonnet enhanced designer Jim Wignall’s creations for Mulliners which integrated the lines from bonnet to scuttle in the vertical plane better than some other designs. The steel panelwork enhanced the lines further with mouldings which lend themselves to two tone or two colour finishing schemes. A tall radiator followed a short-lived fashion of the day by featuring horizontal slats. These did not meet with universal approval and for the 1940 model year they were replaced by vertical ones, a modification sometimes applied retrospectively to earlier cars. London agent Hugh Anderson commissioned a run of two door tourers from Whittingham and Mitchel at £425 and later Mulliners produced a very similar body.

One-offs on this chassis were few and far between. Two dissimilar tourers were made by Cross & Ellis and a ‘disappearing head’ drophead coupé produced by Abbott. One of the prototypes carried a van body by Cross & Ellis, later used by the Works stores department and another prototype carried a Carbodies saloon. This was however replaced by a Mulliners saloon before it was sold. There were two versions of the Whittingham & Mitchel ‘Anderson’ tourers, it being believed that four were of the ‘wide body’ iteration which dispensed with running boards and had helmet style front wings. A few 12/70s were despatched as “chassis only” whose coachwork remains unknown. One “chassis only” delivery became the Dunham racer, to achieve lasting fame at Brooklands and beyond.

The major bodywork change came in late 1938 when the SB became the SC for the 1939 model year, when the saloon body was widened at the rear and accommodation improved by altering the roof line. At the same time the spare wheel was moved from inside to outside the boot lid where it was given a metal cover.

This necessitated the rear number plate and lamps being moved from their recess high up on the boot lid to an external bracket much lower down. All but one of the Mulliners drophead coupés were on the SB chassis, along with the solitary fixed head version. In line with normal pre-war practice, running boards were fitted, the line flowing from the front wings rearwards. Instruments were of the cream faced, backlit variety, a large speedometer with inset mechanical clock plus the four minor gauges combined in a unit. The latter is contrived so that the ‘normal’ readings of 0 amps, 75° C, 50 psi and half a tank of fuel have the needles facing the four points of the compass.

Mechanically, the design by George Lanchester carried over the 73 x 110 mm bore and stroke from the Firebird and SD Speed Twenty but was otherwise completely new. This photo may be of an early prototype. 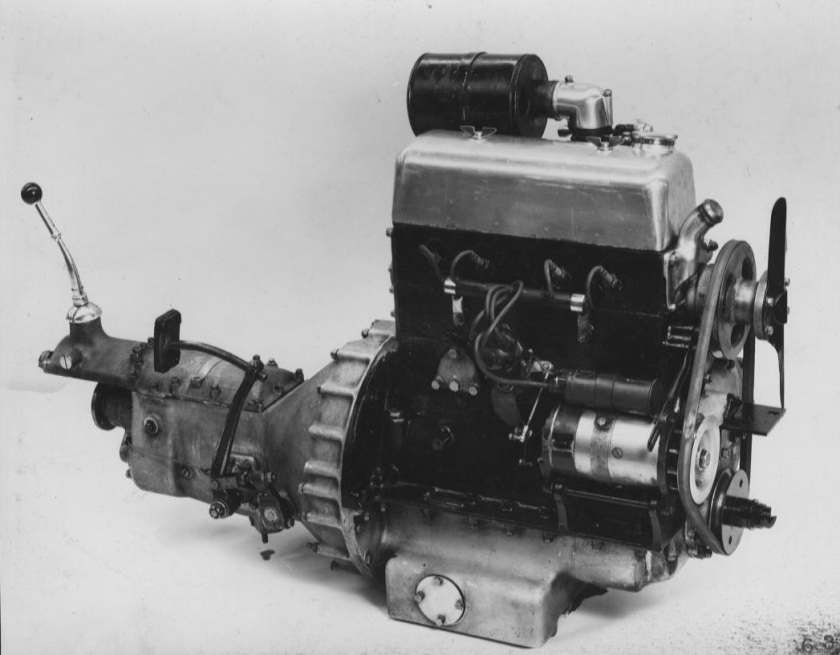 Block and crankcase were integrated in one iron casting whilst the crankshaft was a robust three bearing affair. The camshaft was driven by a triplex chain at the front of the engine without tensioner whilst the valve gear layout followed standard Alvis practice with the porting running through the pushrod gallery. Very early engines had the valve clearance adjustment on the pushrods, but this was soon discarded in favour of the more usual arrangement on the rockers. Most cars were fitted with a single downdraught S.U. D3 carburettor, but some had horizontal twin S.U. AS 4 units whilst early on experiments were made with a Solex downdraught instrument, although only the solitary van from the three prototypes was delivered with this. Coolant was circulated by a front mounted, belt driven pump, the belt also operating the dynamo. Early cars had a two bladed fan but most if not all were converted by Alvis to the later four bladed fan plus thermostat. Early engines had the oil pressure relief valve at the rear offside but this was soon relocated to the front nearside of the block. During production a slight increase in compression ratio was made. Output was 63.5 bhp. Fuel was fed from the rear mounted 11 gallon tank by an S.U. pump. An under bonnet tap switched supply from main to reserve. On the SC cars this tap was operated from the dashboard whilst the SB driver had to open the bonnet. The gearbox was a completely new design, unit mounted with the clutch bellhousing integral with the casing. It had synchromesh on the top three speeds only and drove the rear axle via the usual open propeller shaft. The standard axle ratio was 5:1 but some cars had 4.75:1 or 4.875:1 versions. The tourers generally had the higher ratios.

Design of the chassis represented a departure from previous Alvis practice. At 8’ 10”, the wheel base was shorter than previous four cylinder cars, with the three point flexibly mounted engine/gearbox assembly moved forwards in the frame, which was of slightly lighter ‘C’ section than hitherto, boxed at front and rear, with the latter underslung. Suspension was by traditional half elliptic laminated springs all round, using rubber bushes except at the front spring back mounting which was by bronze bush. The front springs were shackled at their forward ends, another change. 17” centre locking wire wheels with splined Rudge Whitworth hubs were fitted.

The 12/70 used a higher proportion of bought-in components, mainly in the running gear. Beam axles of 4’ 2” track front and rear were supplied by Alford & Alder and ENV respectively, whilst the rod operated 11” drum brakes came from Bendix Cowdrey. The handbrake lever however was a typical pre-war Alvis fitting, a substantial forging mounted vertically on the right. On the SB the mechanism passed above the chassis but on the SC this was changed to bring the operating shaft through the chassis. Steering gear was supplied by Marles as was normal with Alvis, the wheel being a four spoke unit with polished aluminium hub. Control of the lamps was moved from the steering wheel to the instrument panel, although dipswitch, horn button, and ignition controls remained, with the addition of the self-cancelling indicator switch. The SB featured a large back-breaking 12 volt battery under the passenger seat, changed to two 6 volt units under the rear seat on the SC.

The powerful engine and reduced weight in comparison with previous four cylinder models enhanced performance. Top speed was 80 mph with (by the standards of the day) lively acceleration. This combination of a very strong engine and a lighter, low slung chassis has rendered the model attractive to special builders. In comparison with other Alvises, the 12/70 was economical (25 mpg) yet performed well. This combination led to many being driven hard through and after the war years, so many well worn cars were available with restorable mechanical components but bodies beyond financially viable redemption.

Post-war the 12/70 became the basis from which the highly successful TA 14 was developed. Surviving original 12/70s are highly prized as the practical yet charismatic cars that they are. Owners tend to keep them long term so it can be hard to find a good example for sale.