In December 2018 we retrieved five albums of photos from the Coventry archives which record many of the Alvis Owner Club events held since 1953. These photos were digitised some time ago and enabled us to publish them in 2013 with captions to many of them. With the benefit of modern software we are now able to improve on the original quality and to organise them in different ways.

All the photos have a reference of a string of three numbers, such as 4-1-1. The records the photo as from Album 4, page 1, photo 1, as below 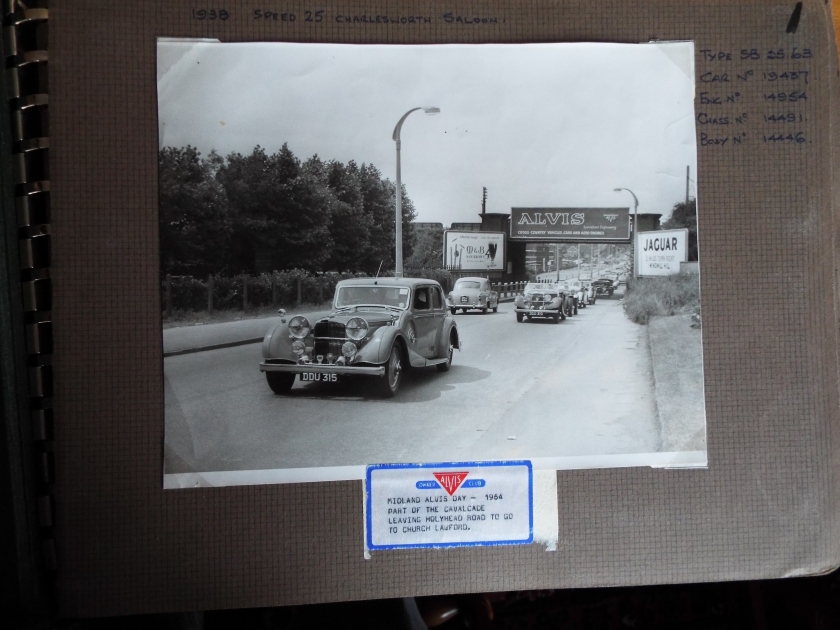 So if you see a photo in another section of the website with this three number reference, we know where to find the original. The rest of this page includes all album 4 photos that were digitised some time ago. If you can identify any photo without a caption or an incomplete one, please click on the photo and add a comment. We can then re-scan if necessary, caption it, and add it to the appropriate model or event page.

Early Bulletins did not include any photographs but photo albums were compiled. This report from Bulletin 20 records an event featured:

– Sunday turned out to be a fine day, providing no snow or other hazards to assist the organisers. As a result, a body of very competent competitors wiped the floor with the former, who had to resort to the doubtful subterfuge of re-calculating the results to very close time limits in order to find the winners.

The entry of eighteen cars was sent off at two minute intervals from the start at Badger’s Cafe on A21 near Tonbridge, the first car leaving at l p.m. A distance of 12 miles to the first control had to be covered at an average speed between 21 and 28 m.p.h., and competitors were then required to cover the rest of the route through four check points, involving about 60 miles of by-roads and lanes, at the same average speed as they had recorded in the first section.

One or two competitors spoilt their chances by misreading the route card, while another was forced to retire after the misfortune of running a bearing at the end of a fast stretch of road.

As the cars were booked in at the finish at Badger’s Cafe, the general opinion seemed to be that the route was enjoyable but too easy at the set speeds, and dark threats were issued by the organisers to the effect that there would be no complaints of this kind at the next event.

After an excellent tea, the results were announced and prizes were presented by Mrs James.

How you can help