The last Register was published in 2002, compiled by George Butlin, who wrote:

“In the Alvis Speed Twenty–Five the makers have produced a car which will delight those who appreciate fast motoring with an ample margin of safety. A very quick response to the accelerator is matched by exceptional steadiness under heavy braking conditions, light and accurate steering, and road holding of that special quality which is so rarely encountered nowadays.”

Thus was the Speed Twenty-Five introduced by Motor Magazine on August 25th 1936. In fact, as was not uncommon throughout the history of Alvis, the Speed Twenty-Five may have derived from “parts-bin” engineering – the development of the Speed 20 SD chassis in its final flowering, with the engine from the 3½ litre car introduced in October 1935 and originally used in the longer 10′ 7″ chassis, as opposed to the Speed 20’s 10′ 4″ wheelbase, and to suit the needs of potential “carriage trade” coach builders.

The Speed Twenty had acquired a formidable reputation, but the later models were becoming under powered (or overbodied) by comparison with their competitors. This was particularly so when cars were fitted with the less spartan and more opulent coachwork commissioned by Charles Follett and other dealers and individuals.

The Speed Twenty-Five was gradually developed and refined from the original SB series to the 1938 model SC with a price increase – of £25 for the chassis, but additional power arising from the “short stud” cylinder head, and latterly for 1939 a dual exhaust system.

As with the Speed Twenty, Charlesworth remained the factory appointed coachbuilders, using to great effect the comparatively low bonnet line to produce lithe, agile, flowing lines. However tourers were more commonly the work of Cross and Ellis.

For 1939 Saloons had double sliding sunroofs, and valences to replace running boards to give a more modern and rakish appearance.

Although the factory Charlesworth coachwork is often less appreciated than the more individual bespoke offerings of other coachbuilders, it was both extremely elegant and beautifully constructed.

The final development of the 1940 model included further improved performance through increased compression ratio, and smoother running by virtue of two adjustable tie-rods to dampen vibration.

There are many contemporary, and now re-published, road tests and reports praising the models design and engineering integrity – Alvis were first and foremost engineers, who, unlike other manufacturers, left coach-building to others, albeit under strict guidelines.

Equally illuminating, are extracts of correspondence from Motor Sport in the 1950’s and 60’s, where correspondents were able to demonstrate from contemporary road tests, that the Speed Twenty-Five was more accelerative, and with the same top speed as, for example, the considerably more expensive and larger engined Lagonda LG6. In terms of sheer performance the Derby Bentley, even in 4¼ litre guise, was very much an “also-ran”.

TOTAL CHASSIS PRODUCTION of 391 was laid down in four batches:

Today (2002) 153 cars survive in the form in which they were despatched from the factory. A further 51 cars survive as specials, built mainly for sporting purposes, further demonstrating the strength/competiveness of the breed as well as living up to T.G. John’s belief of improvement by competition.

This register was prepared using data provided by the Dave Culshaw, Charles Mackonochie, Wayne Brooks, Mike Newman (the previous Speed Twenty-Five model secretary) and the many members who have been kind enough to volunteer information. It is worth noting that one of our most valuable sources, old members books, can perpetrate errors of transcription which are then repeated. We have done our best to correct anomalies, but no doubt sometimes without success.

The body, type, maker, and engine numbers are those shown in the original records.

The following abbreviations are used:

We are in the process of updating the Register and the first steps have been completed with a summary of the production with the first UK registration numbers with new research by Dave Culshaw and Wayne Brooks. Newly researched registrations are highlighted in yellow. Two/three letter ones are country abbreviations.

In addition, the first two batches have been updated:

Any corrections or comments are welcome.

Steve Horne had been in contact with the organisers of the Hampton Court Concours of Elegance and reminded that the AOC could nominate a candidate for the Inter-Club Concours on Friday 31st August 2018. George Butlin was persuaded that his 1938 Alvis Speed 25 Drophead coupe by Charlesworth, substantially modified during its construction by Hoopers, definitely needed an airing and a good polish.

George was left to his frenetic preparations and to finalise the details of his entry ‘By invitation’, direct with the organising committee. Thankfully, he had prepared a most suitable resume of the car’s history with some fine references to the Hooper connection, its wartime exploits and political canvassing in the post-war years prior to George’s ownership and of course there is no-one better able to describe with passion the intricacies of the Speed 25 model and his own car in particular.

As an Alvis Owner Club nominated entry, George entered alongside a huge array of immaculate and very distinguished marques with equally important historical significance, so it says much for the quality of the restoration and his constant upkeep, that the panel of selected Royal Automobile Club judges decided that his Alvis Speed 25 should be the RAC Club Trophy winner.

This huge accolade was followed by presentation of the car in the Rotunda at The RAC Club in Pall Mall.

The following gallery is sourced mainly from the Ernest Shenton Collection. You can click on any photo to start the gallery and make comments on any photo.

A prototype body was first built numbered AS136 (Alvis Special) on chassis 13326.

A video describing the Cross & Ellis tourer is here

The W O Bentley Memorial Fund has kindly sent some photos of Alvis in their collection including this one. But which one is it – distinctive rear lights – Speed 25 Cross & Ellis and where is it now?

At 31039 the Cross & Ellis insolvency occurred when there were still ten or so incomplete frames around the factory. These were taken over by Charlesworth for completion and given Charlesworth numbers 14811 to 14820.

14814 and 14818 cannot be accounted for  and would appear to have been destroyed in the blitz on November 14th 1940 but the remaining eight are all accounted for by chassis and registration numbers.

Total production was therefore 47 of which 39 were C &E and 8 Charlesworth which are visually identical. The car below was repatriated to the UK by Brian Classic. 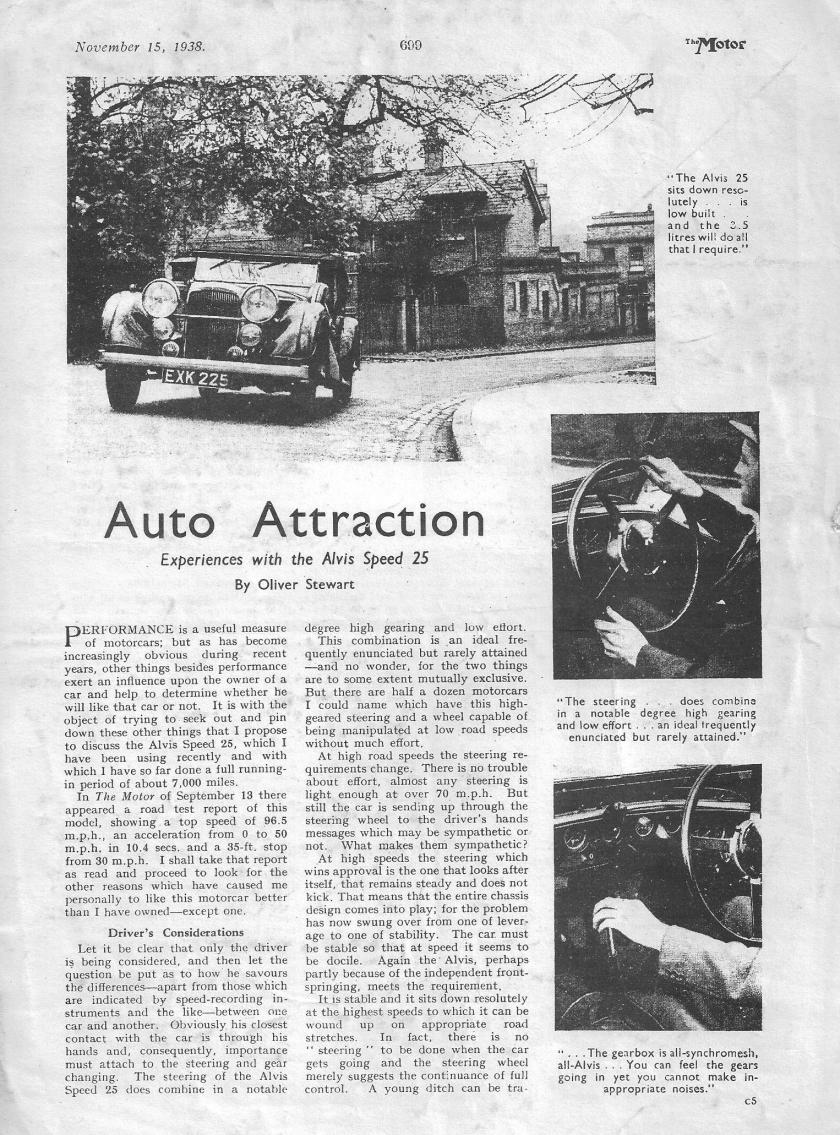 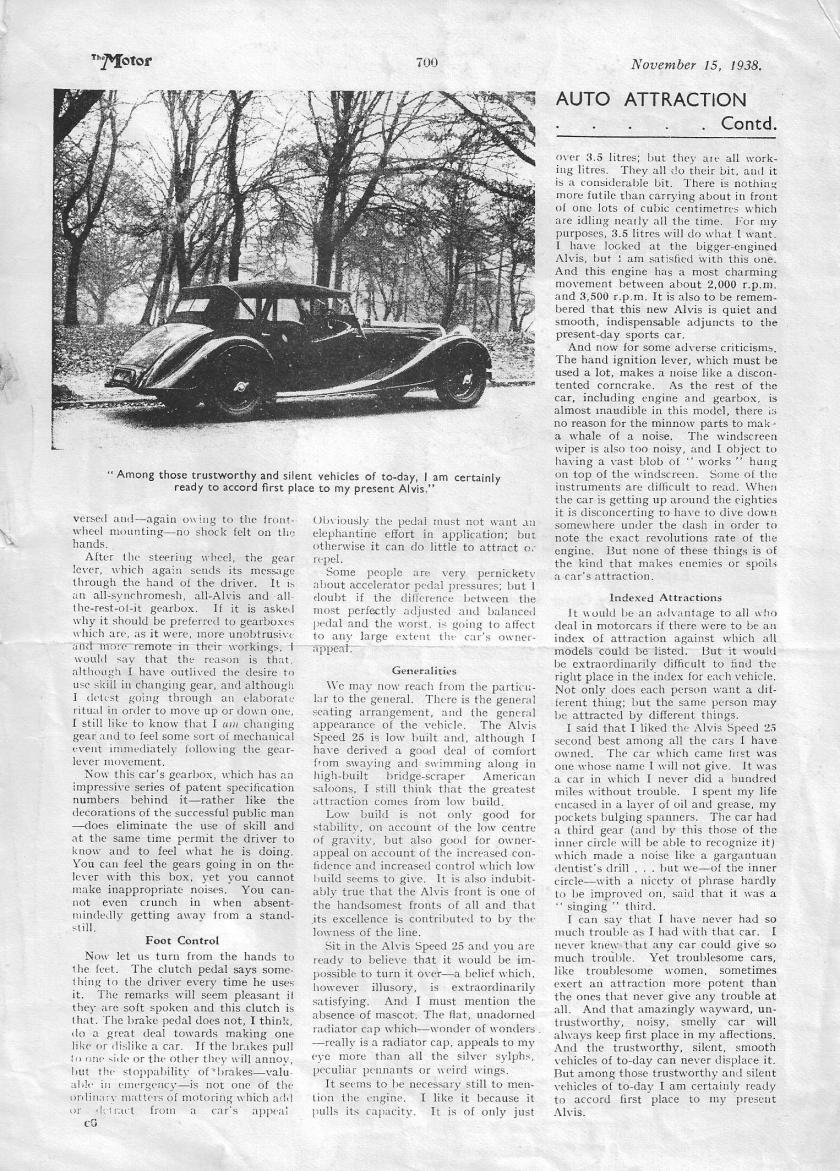 The Bradnum’s Speed 25 tourer ERF 349 featured in Classic Cars magazine recently and researching its history produced enough material for a book. It was originally owned by the 6th Viscount Newport and a request to the Weston Park Foundation for a photo when new produced one not of the Speed 25 but of an earlier car.