On this day one hundred years ago the first experimental Alvis 10/30 car was completed. To celebrate this as best we can, here are some of the photos and messages received in the last few days…

From Hans van Tongeren in the Netherlands a small gathering at Galerie Aaldering in Brummen after the Louwman exhibition:

From Mark Jenkinson news that the restoration of his Speed 25 Charlesworth saloon 14468 BTM 509 will soon be completed.

From Harry Hawkins in Cumbria

I sent this photograph of OJ 690 some years ago and I received back in reply a photograph of the car rebuilt as an open tourer. At that time it belonged to a person living near Halstead in Essex, this would have been around 2010. 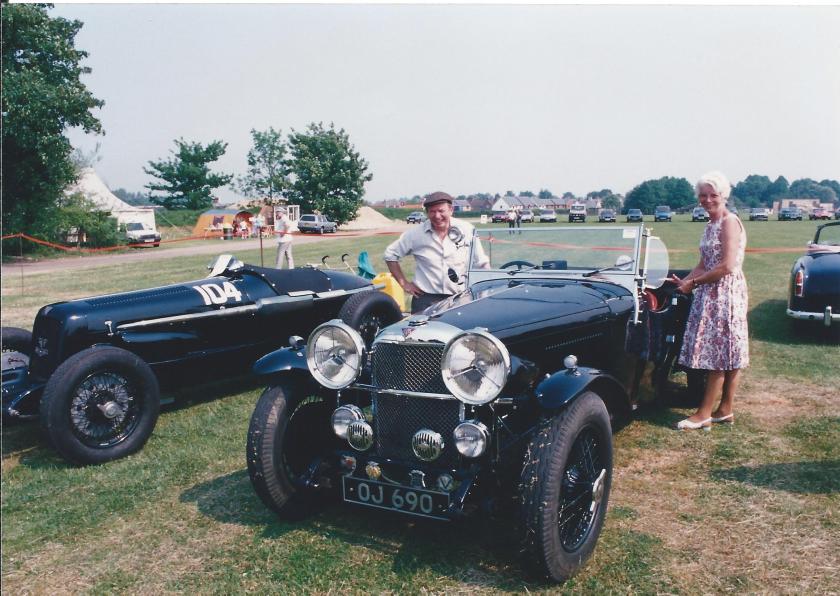 I lived at Gosfield which is 3 miles from Halstead from 1970 to 1980 and was never aware that OJ690 had been rebuilt and kept nearby! I sold the car in 1964 when I became unable to store it securely following a timing fault which I could not repair despite taking the engine out and resetting the timing several times, I was single and itinerant at the time.

I had the Austin Seven ‘Chummy’ for about a year having found it in an orchard and paying £10 for it.

From Rick Graham in Cornwall

This photo is from your collection -owned by a person I don’t know.

I owned this car but you can see the body has been considerably modified from when I owned the car in 1965- This pic was taken at Rycotewood college in Thame where I was studying engineering. 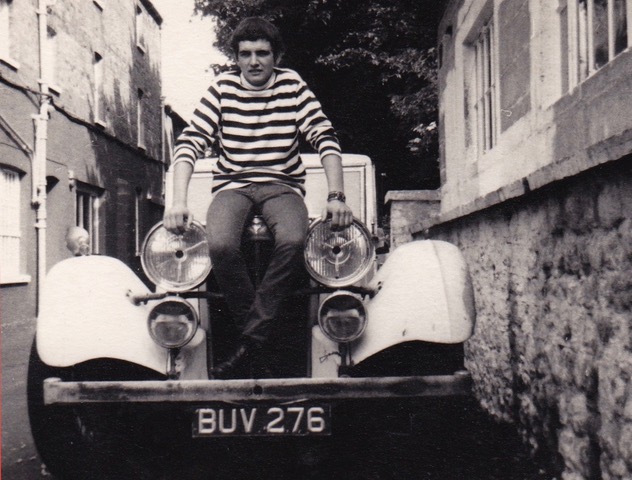 I was about 19 here – sitting on the bonnet of my Alvis Speed 20. I come from Henley on Thames. One of my friends father worked on a farm there, and lived in a tied cottage on a remote area of the farm, and because he had a workshop we used to go down there to build motorbikes and cars, and generally cause mayhem.

One day, he mentioned an old wreck of a car that had been stored in a tumble-down barn on the place for years, so I being a fan of wrecks- usually 30’s American (My first car- at age 15, was a 1939 Hudson 112!) went and had a peer through the door. I saw the headlights, and that was it!

I found the owner through the rent he paid to the farmer, and visited him. He’d not even seen the car for years, so I got the key and had a look- you couldn’t see it for dust- about 1 inch thick, and the bonnet was open with the head off and stripped down – piles of springs everywhere, and covered in rust!

I gave him what he wanted -30 quid, and we towed it into the daylight, took it to the farm I lived on, and started on it. My main memory of that was chasing the valve springs all over when the spring clamp slipped off a couple of times – I’d never seen the 9 spring valve setup before!

Actually managed – after changing oil, stripping the carbs and distributor, and generally cleaning everything up – to get it going!! Wonderful noise!

Next thing, of course, the clutch was seized! This was freed the easy way by towing the car with a tractor around the field with the clutch in until it let go with a bang – and it was all fine from then on.

The seats were shot – so I put a couple in from some other car which happened to fit, and off I went!

I used the car for a while, without too many problems as I recall, but the fearsome fuel consumption got the better of my apprentice wage, and I was forced to retire it, then sell it. Someone had given me a spare gearbox he happened to have laying in his garage, and I sold the lot as a runner, for £110, and thought I’d made a fortune!

Went out and bought a triumph TR3, and a Triumph Tiger 110, and still had change! Never thought I’d see it again, until I came across the photo in your archive! If you could pass this to the present owner – please do. [Can do – the owner is a Follower in Sheffield]

Not that long after I got the car, the barn was pulled down, and had I not had it it would most likely been scrapped- so I’m glad I saved part of our heritage!

I’ve been doing much the same with motorbikes more recently, as they are easier to store! I recently sold my 1937 Rudge to fund a divorce and house move! I would love another Alvis – or maybe a Bristol- had 4 of those as well- 400/401s because I want a car with no computers on to see me out!!

Hi, in an idle moment I came across your web site and located a reasonably recent photograph of this Speed 20 which I owned in around 1962/63 having purchased her for the grand sum of £65 from a dealer who granted a discount for the ‘poor synchro’.

I thought you and the current owner may be interested in this grainy photo (poorly scanned from a 35mm slide) whilst she was in my ownership. Sadly I only owned the car for about 6-8 months at the time, as a lad at the tender age of 17 years, I was interested in something modern.

In long term ownership, and participated in the 1991 Tour of Britain, this car was first used by the Police:

From Tim Perks progress on the restoration of his 4.3 Charlesworth saloon 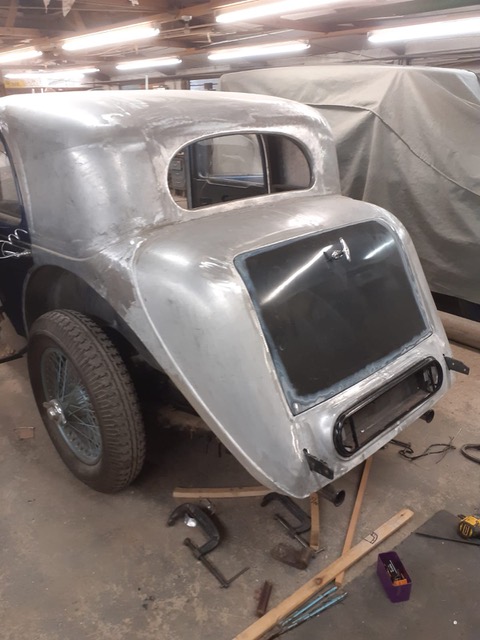 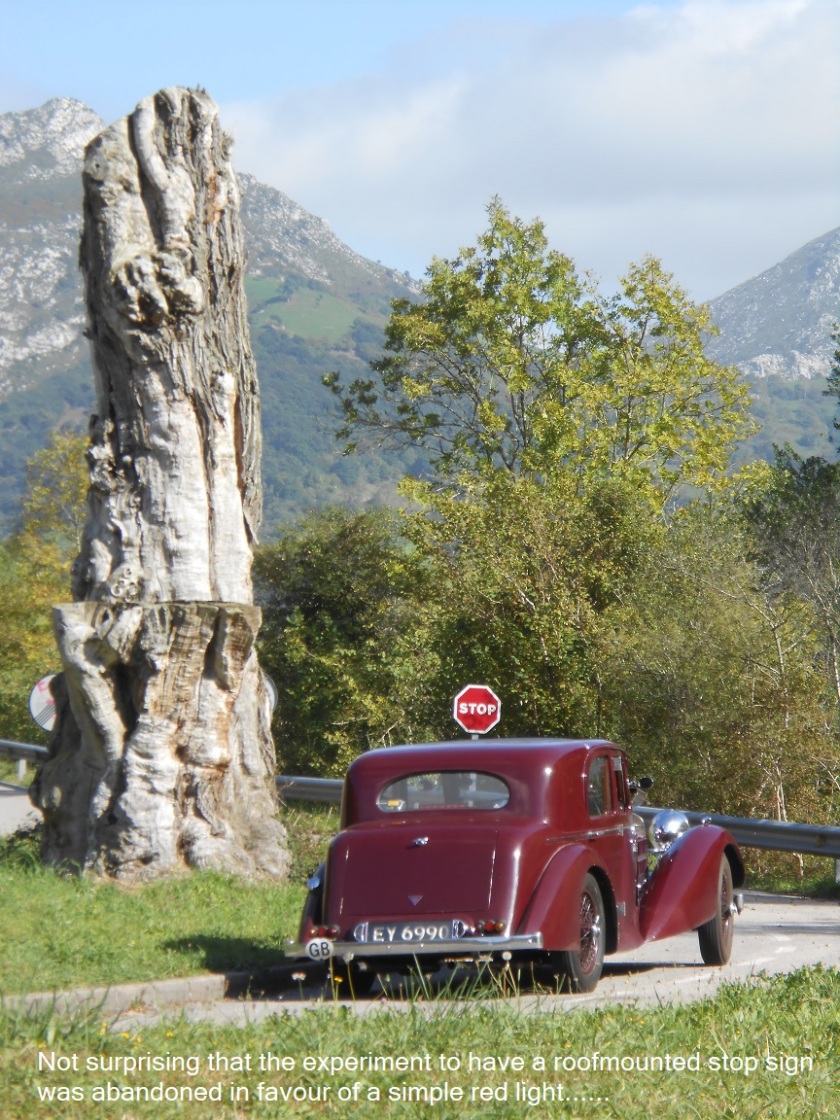 from a friend in the USA

and nothing to do with Alvis…