A couple of accessions this month have added greatly to our film and DVD library and our ability to show them at Bowcliffe. Over thirty  films of Alvis events by the late Terry Poppelwell during his long ownership of his well known 12/60 have now been catalogued.

The addition of another large screen TV also makes it easier to show the many VHS tapes we now hold. The first TeePee film we tried strangely started with the donor of the TV introducing the event.

Last week we had a visit from Melanie Aspey, Director of the Rothschild Archive in London. Three trustees had an entertaining and informative day learning of the activities and procedures of a large and important archive and some insight into fund raising methods and record keeping. It was pleasing that our adoption of the FileMaker database was heartily endorsed.

Lincolnshire folk were treated to a fine display of coachwork on Alvis chassis at Doddington Hall last Sunday. No fewer than 24 immaculate models graced the courtyard and four of them had pride of place in front of the Hall. 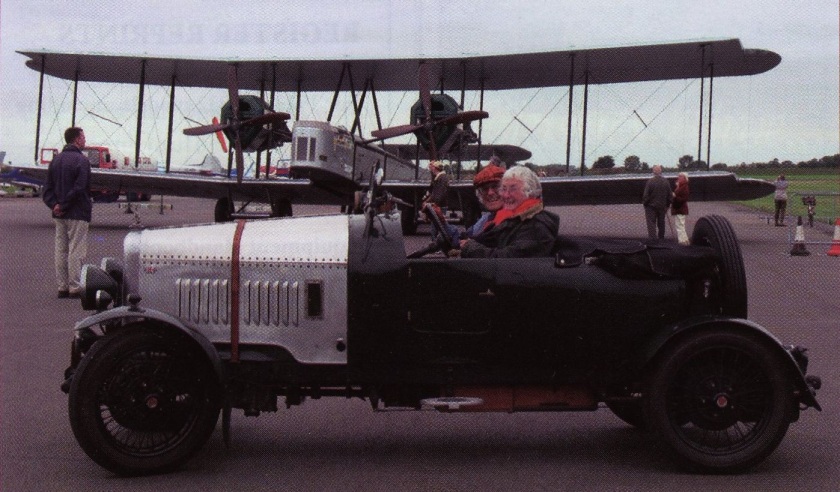 This replica Vickers Vimy was built for that enterprising and enthusiastic gentleman Steve Fossett, and was flown across the Atlantic as a tribute to the 1919 flight of Lt John Alcock and Lt Arthur Whitten Brown. The picture was taken at the 2005 Fly-in at Turweston Airfield in Northamptonshire – 1932 12/50 TJ Special by Peter Wright NG 3638, from The Alvis Register Bulletin No. 231, Summer 2007.

From the Consultant Historian – Another Centenary: It is one hundred years ago ( 14th/15th June 1919 ) that John Alcock and Arthur Whitten Brown made that epic first transatlantic air crossing. This was done in a converted Vickers Vimy bomber with extra fuel tanks in place of the bomb racks.  It is not widely known that on 12th July 1921, the by then Sir Arthur Whitten Brown took delivery of an Alvis 10/30, chassis 6247, registered HP 1821. One would like to think that he made a bee-line to Alvis for engineering reasons. Actually the reason is probably more prosaic.  Vickers were making the Alvis chassis at the time.

2 thoughts on “More films and photos”